MELBOURNE, Australia, April 30, 2021 /PRNewswire/ — Dubber Corporation Limited (ASX: DUB) (‘Dubber’ or ‘the Company’), the leading global Unified Call Recording & Voice Intelligence cloud service designed for service providers and businesses of any size, is pleased to release an update on the Company’s operating focus along with the Appendix 4C for the quarter ended 31 March 2021.

Growth in all key metrics – Users and ARR

During the March quarter the Company’s key metrics all experienced substantial growth.

User numbers grew at a record rate for Dubber’s SaaS monthly subscriptions. The Company expects user growth to increase significantly in the current quarter due to new initiatives including the launch of its Foundation Partner Program. Foundation Partners embed Dubber services within their offering as a standard and in-built feature – from which both Dubber and the partner then benefit from upgrading users to richer functionality and offerings.

The March quarter represents a milestone period relating to comparative user growth quarter on quarter. The Company expects to receive Foundation and consumption-based revenues moving forward with larger and varying user attachment rates to those revenues. Therefore, as previously indicated, the key growth metric relating to short term growth is the Company’s Annualised Recurring Revenue (ARR) which has grown by $5.6m, to in excess of $34m. 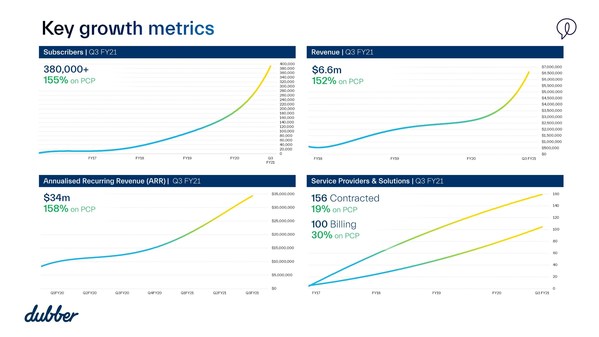 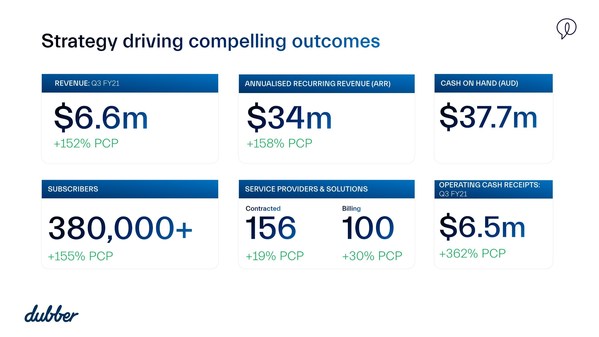 The Company continued to expand its footprint of service provider networks along with increasing penetration and revenue yield from its current telecommunication and Unified Communication (UC) platform partners.

Currently, AT&T and IBM are engaged with existing mutual large enterprise customers to demonstrate the value of the newly available services on the platform which add substantial insights to those organisations, enabling them to gain valuable business intelligence from their voice data.

The Company expects the Dubber platform to be live on additional AT&T networks in both the short and medium term.

The Company has recently become one of only two vendors certified for Compliant Call Recording for Microsoft Teams.

Dubber is already the embedded and only recording offering for Cisco’s Webex Calling platform with the Company expecting to substantially extend its relationship and availability with Cisco Webex in the near term.

During the quarter, the Company also announced availability of a Unified Call Recording solution for Zoom that allows for secure compliance and voice intelligence call recording for Zoom Meetings as well as Zoom’s recently launched cloud phone service, Zoom Phone.

Typical business communications usually involve the use of desk phones, mobiles, and UC services such as Cisco Webex, Zoom and Microsoft Teams. Dubber is uniquely placed to be able to capture recordings and voice data from all services and store them in a single location, the Dubber Voice Intelligence Cloud, where they can be managed centrally.

Behind these UC platform announcements is an industry trend whereby large global service providers are releasing their own network offerings in conjunction with cloud collaboration platforms like Zoom Phone, Microsoft Teams and Cisco Webex Calling. Dubber has detected a pronounced acceleration of telecommunication services moving to a cloud environment, either from traditional telecommunications carriers or by stand-alone UCaaS services in the last two quarters.  By virtue of its unique ability to be embed into the fabric of a network and operate at scale, the company is a significant beneficiary of this trend and we believe it will continue to accelerate globally in the quarters ahead.

The Dubber platform has been designed specifically for large scale availability across telecommunications networks, as opposed to legacy bespoke recording products for enterprises, which are largely tied to on premise equipment, capital expenditure and call centre environments.

"We are delighted to have delivered such a strong quarter, achieving outstanding growth in all of our key metrics.  The company is very well positioned to continue to take advantage of the major shift towards cloud based and ‘work from anywhere’ communications we are seeing in all our geographies. Governments and businesses understand the need to act on the requirement to capture conversations and voice data across their entire business. Ever expanding requirements to record and store conversations for proactive compliance and dispute resolution, and, revenue, customer and personnel intelligence all continue to drive the need for voice data and intelligence at scale. We remain very positive as to Dubber’s growth and leadership."

In line with requirements of lodgement of the attached Appendix 4C, the Company advises that payments shown in Item 6.1 of the Appendix 4C are in relation to Executive and Non-Executive Director remuneration (including superannuation) and form part of the operating expenses for the March quarter.

This ASX release has been approved for release to ASX by Steve McGovern, CEO & Managing Director.

Dubber is unlocking the potential of voice data from any call or conversation. Dubber is the world’s most scalable Unified Call Recording service and Voice Intelligence Cloud adopted as core network infrastructure by multiple global leading telecommunications carriers in North America, Europe, and Asia Pacific. Dubber allows service providers to offer call recording for compliance, business intelligence, sentiment analysis, AI and more on any phone. Dubber is a disruptive innovator in the multi-billion-dollar call recording industry, its Software as a Service offering removes the need for on-premise hardware, applications or costly and limited storage.