SEOUL, South Korea, April 28, 2021 /PRNewswire/ — Dtonic, a member company of Born2Global Centre, specializing in work with spatio-temporal big data, will participate in the finals of the SelectUSA Tech pitch competition in the United States. On April 16, Dtonic won the Korea-region online round of SelectUSA Tech pitch competition, organized by the U.S. Embassy in Korea. 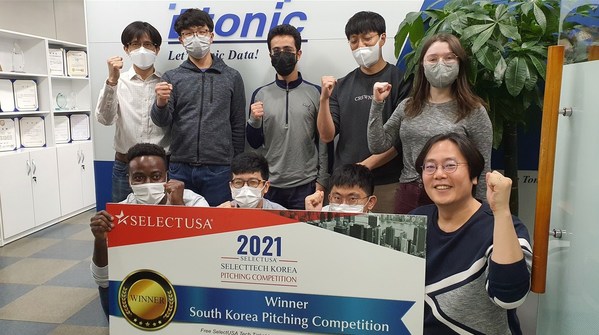 Dtonic qualified for the next round of SelectTech pitch competition, part of the 2021 SelectUSA Investment Summit, to be held online June 7-11. Dtonic plans to showcase its technology to a diverse audience of more than 3,000 participants by means of an online exhibition booth through a virtual platform provided by the U.S. Economic Development Administration. Marking its eighth anniversary, the SelectUSA Investment Summit focuses on connecting technology companies with key players in various ecosystems to support the entry of early-stage and emerging technology startups into the United States.

Dtonic was recently selected for KIC Silicon Valley’s Express Soaring 1 program, and is actively expanding into the US market by conducting market verification-based localization. In addition, its inclusion in GO AUSTRIA Spring 2021, an incubation program operated by Global Incubator Network Austria (GIN) has increased the visibility of its presence in European markets. Dtonic is also preparing to enter Europe, the Middle East, and Latin America through various joint projects, accelerator programs and venture capital investment, and arrange technology transfer with local companies.

Dtonic’s technology Geo-Hiker resembles a boosting engine that helps speed up processing and analysis of spatio-temporal big data. It utilizes a top-notch indexing algorithm based on the spatio-temporal characteristics of big data. In addition, advanced data distribution technology is applied for optimal channel load between nodes to maximize data processing performance. This technology was introduced to Hyundai Motor Company and the Korean Road Traffic Authority and will be used in the Busan Eco-Delta Smart City and Bucheon Smart City Challenge projects as well as projects for autonomous vehicles and future mobility, smart factories, and smart farms.

Spatio-temporal big data technology developed by Dtonic is regarded as the core of Korea’s COVID-19 Epidemiological Investigation Support System (EISS), which played a pivotal role in the success of Korean quarantine. Today, EISS is being exported worldwide. This contribution by Dtonic proved excellence of Korea’s quarantine system to the world.

Yong-Joo Jun, CEO of Dtonic, said, "After Dtonic’s win in the Korea region competition of SelectUSA Tech pitch competition, we will actively promote the application of our superior technology in a wide variety of fields around the world. Since participation in the competition serves as a promising opportunity for the global commercialization and localization of the work we are currently pursuing, Dtonic will continue our efforts to grow into more diverse areas."