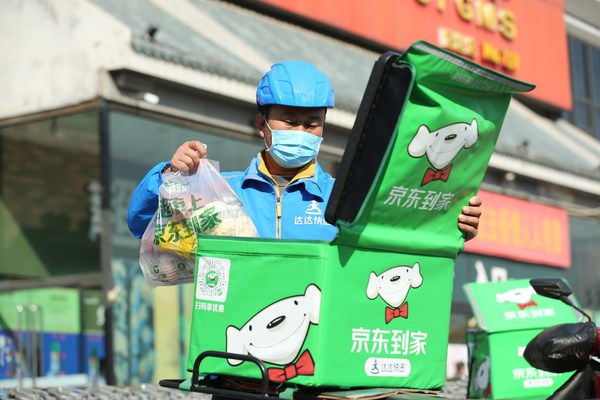 This year, due to the COVID-19 pandemic, many residents have chosen to stay home and stay put in China. Instead of going out, consumers are placing orders online, and Dada’s one-hour delivery is streamlining the process. JDDJ’s data shows that the number of orders that users placed from a city other than their own was twice that of the comparable period last year, while top 100 best-selling items on the platform was related to eating and drinking.

During this year’s holiday, the regional differences of the New Year’s Eve dinner has been reduced. For example, according to JDDJ, sales of chili powder in the traditionally sweet-eating cities of Hangzhou, Nanjing and Shanghai, were increased by five times, four times and three times respectively that of the same period last year. Chili powder’s sales in Guangzhou also was quadrupled over last year.

On the other hand, sales of sweet bean sauce in Kunming, Guiyang, Chongqing and Chengdu, where residents usually have the dinner favor of spicy, were rose by eight times, four times, three times and two times, respectively, compared with last year. In addition, dumpling’s sales in south China rose, while rice cake’s sales in north China increasing. That is, taste exchange becomes a new trend on the dinner table on the New Year’s Eve this year.

JDDJ’s guidebook on New Year’s Eve dinner shows that sales of barbecues, dumplings, hot pot dishes, cold noodles and oden cooking are increased by 16 times, 14 times, 9 times, 8 times and 5 times respectively, compared with last year on the platform. Many residents who stay home and stay put during this holiday in China, choose to make a meal for themselves in a relaxed and simple way, which drove the online consumption of instant food across the country.

Healthy food has become a trend in the New Year’s Eve dinner. While milk tea and hotpot continue sell well, sales of salads, vegetarian chicken breasts and sandwiches on JDDJ are 24 times, 7 times and 3 times more than the same period last year respectively, and alcohol-free beer ranks first in terms of sales growth among alcoholic beverages. The five first- and second- tier cities where healthy food rose the most are Chengdu, Guangzhou, Shanghai, Hangzhou and Beijing.

Meanwhile, Dada Group also continues to provide large amount of subsidies for the riders who stay at their positions during the Chinese New Year. Dada also joins hands with chain retailers to set up rider stations in offline stores, provides festival goods and red packet, holds New Year’s Eve dinners and other activities for riders.