– The CricketPang Kindergarten App utilizes the characters from CricketPang, an animation to be aired next month, for an app filled with educational content for children.

– Including contents created by excerpts specializing in educational content for children. 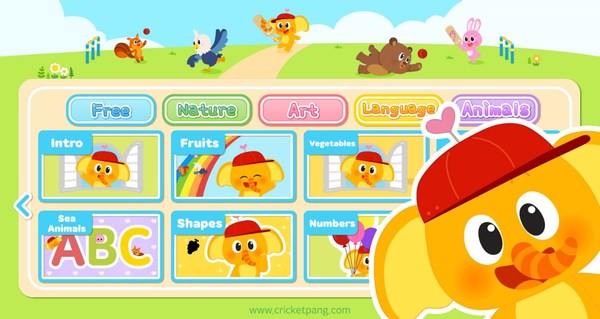 The CricketPang Kindergarten App has recently passed 60,000 downloads in a month since its launch, which confirms the demand for such services and a need to start expanding the platform.

YOU NEED CHARACTER was established in 2017 by Mr. SONG Minsu, who has built experience in the animation business for 15 years. The business is making forays into markets worldwide with a variety of contents for children’s education, composed of different themes and creative ideas.

CricketPang Kindergarten App uses the character IP of Cricket Pang, an animation to be aired on major TVs and OTTs worldwide next month. The content of the app was made by experts specializing in the education of young children.

–       CricketPang Kindergarten App can be used by young children of different ages. The content is expected to keep children interested by combining character animation with the education materials fit for kindergarteners.

"CricketPang Kindergarten App is an educational app for kindergarten- aged children that use the CricketPang character IP. We created content that is easy and interesting for kids to enjoy learning," said President Minsu Song of YOU NEED CHARACTER.

<About YOU NEED CHARACTER Co., Ltd.>

The business was established in 2017 by President Minsu Song, (who has built experience in the animation business for 15 years) and other content production experts. They are making forays into markets worldwide with a variety of contents, as a producer of character animations and educational content for children.

Tencent Cloud Teams Up with Acclivis To Offer Industry-Leading Cloud and ICT Offerings in Southeast Asia, the Chinese mainland and Hong Kong

PUBG Mobile Battle Arena Season 4 Is Back With a Prize Pool of 100 Juta Rupiah Supported by NFT Game, CryptoBlades