HONG KONG, Oct. 29, 2021 /PRNewswire/ — BOAX NFT Marketplace and its affiliated digital media production house IZBLU Labs recently launched their latest NFT collection RMBits (www.rmbits.io). This is the first Chinese Meebits style NFTs in the world inspired by the most famous classic Chinese characters in ancient Chinese literature and Chinese mythology. The first release of the 12 original RMBits were sold out within 24 hours. Right now, the full RMBits collection includes 8 characters from Journey to the West, 4 characters from Romance of the Three Kingdoms and 3 special ones from Stories in Chinese Mythology in celebration of the Mid-Autumn Festival.

Among these 15 RMBits, the most widely known one is Monkey King, a legendary mythical figure best known in the 16th-century Chinese novel Journey to the West. While fascinated with its prowess and wisdom, many are inspired by his rebellious spirit against the then untouchable feudal rulers. Other RMBits from Journey to the West include Tang Sanzang, Zhu Bajie, Sha Wujing, Niu Mowang, Tie Shan Gongzhu, Baigu Jing, and Zhizhu Jing. 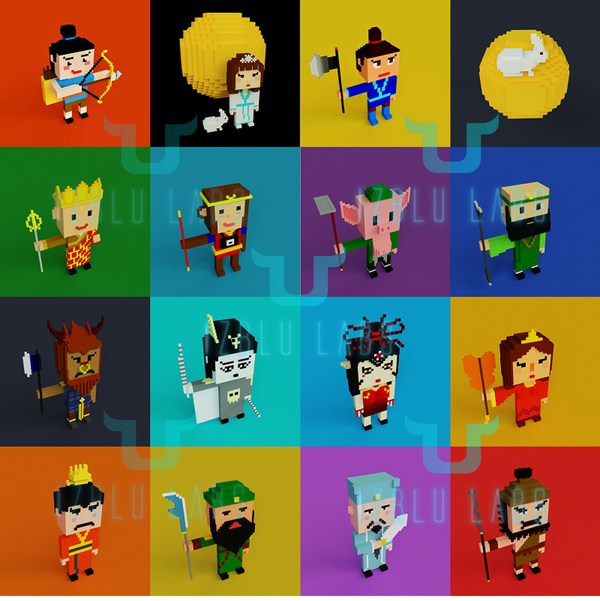 There are also four RMBits inspired by main characters in Romance of the Three Kingdoms. They are Zhuge Liang, who is recognised as the most accomplished strategist of his era; Liu Bei, who founded the state of Shu Han in the Three Kingdoms period; Guan Yu and Zhang Fei, who were among the earliest to join Liu Bei, shared a brotherly relationship with their lord and accompanied him on most of his early exploits.

To celebrate the Mid-Autumn Festival, IZBLU Labs created three special mythological RMBits related to the "moon": Wu Gang, commonly known as the Chinese Sisyphus because of a divine punishment which has led to him endlessly cutting down a self-healing osmanthus tree on the Moon. Chang’e, the Chinese goddess of the moon, best known for stealing an elixir of immortality from her husband, Hou Yi. And Hou Yi, A skilled archer who shot down 9 extra suns to save the earth.

"We do not mass produce our digital art by algorithm, rather we take pride in handcrafting and delivering our best artworks which are creative, fresh, and modern, with Chinese cultural undertones – just like our iconic RMBITS series", the founder of IZBLU Labs Mr. Ian Wen stated, "These RMBits relive the life of ancient heroes and heroines in the modern year of Metaverse. We welcome you as an owner of RMBits to join this epic journey and rewrite their legends of unlimited possibilities."

BOAX, a new premium NFT marketplace which empowers users to trade rare digital assets online soft-launched in July 2021. Empowered by its banking partner Bank of Asia and related ecosystem, BOAX is uniquely positioned as a strong player in the digital asset space. It serves to facilitate the most influential speakers in this circle and beyond to unite and make positive social impact through the sharing of art in the digital form, connecting the younger, tech-savvy generation to the masterminds and their masterpieces.