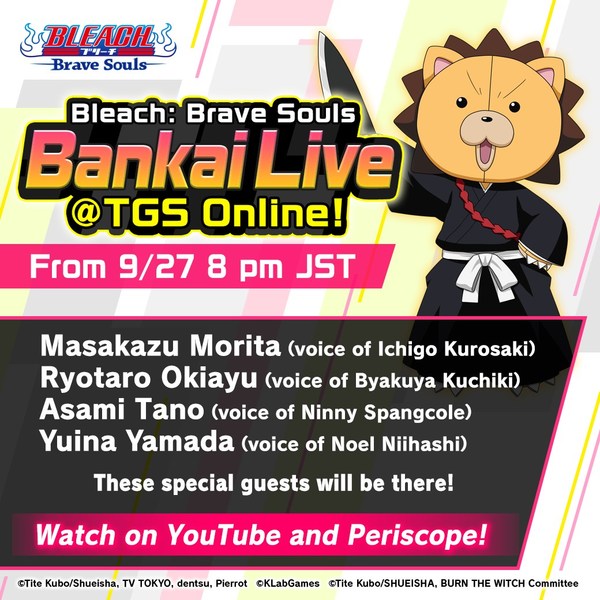 This special live broadcast will feature Yoshiyuki Hirai from America Zarigani, a popular comedy duo based in Japan, as well as Azusa Sekine from the Japanese idol group Up Up Girls (Kakko Kari) as MCs. It also features an impressive display of talent from the Bleach anime series, including Masakazu Morita, the voice actor for Ichigo Kurosaki, and Ryotaro Okiayu, the voice actor for Byakuya Kuchiki. In addition to the familiar special guests, the cast will be joined by Asami Tano, the voice actor for Ninny Spangcole, and Yuina Yamada, the voice actor for Noel Niihashi from Burn the Witch the latest work by Tite Kubo, the original author of Bleach.

The program will feature new announcements and include segments like the Co-Op Challenge Corner, an interactive segment where viewers can play with the guests, and the Brave Souls News Corner. The latest game info will also be unveiled, so Bleach: Brave Souls fans will not want to miss this special TGS Online program!

There will also be a special Bleach: Brave Souls Bankai Live @TGS Online RT Campaign that viewers can participate in on the day of the livestream.

Participate in the RT Campaign For a Chance at Bleach: Brave Souls Original Swag

The Bleach: Brave Souls Bankai Live @TGS Online RT Campaign will be held in coordination with the livestream on Sunday, September 27. To enter, players simply need to follow the official Twitter (@Bleachbrs_en) and retweet the specified tweet on the day of the livestream. 5 randomly selected winners will get Brave Souls original swag!

Details on the campaign and how to participate will be announced later on the official website, social media, and in-game.

This project is based on Bleach, a popular Japanese manga featured in Shueisha’s landmark comic anthology, Weekly Shonen Jump, until issue #38 of 2016. The series premiered in 2001, quickly gaining a dedicated fan base and selling a total of over 120 million copies of the 74-volume manga series. Bleach has become a powerful media franchise, spawning an animated television series that ran from 2004 to March 2012, and a total of four feature-length films that have been released in theaters to date. In addition, 2020 marks the 20th anniversary of the serialization, and the "BLEACH 20th Anniversary Project" is currently underway. The series’ popularity extends beyond Japan, to an international audience, where it continues to find new fans and dedicated followers around the world.

About BURN THE WITCH

The latest creation by Tite Kubo, the original author of Bleach. The stage is London where a dynamic story of fantasy and action unfolds as two witches begin their enduring fight against fantastical beings known as dragons. The series will be featured in Weekly Shonen Jump in the summer of 2020 and an animated film adaptation will premiere in the fall of 2020. This large-scale project began in 2020 and has gained popularity amongst many comic and anime fans alike.

KLab is a leader in online mobile gaming. Founded in 2000 and headquartered in Tokyo, the company is listed on the 1st Section of the Tokyo Stock Exchange. KLab has consistently ranked as one of the top 52 grossing game publishers worldwide since 2012. With its emphasis on quality and innovative games, KLab continues to grow at a rapid pace, expanding beyond the Japanese market with an office in Shanghai. For more information about KLab, please visit http://www.klab.com/jp/english/.

Insider, #1 Leader on G2 Summer’21 Report for Personalization and Mobile Marketing outplays all providers by delivering up to 3X faster time to value (TTV)

Chainalysis Raises $100 Million at a $4.2 Billion Valuation to Execute Vision as the Blockchain Data Platform