PARIS, Dec. 1, 2020 /PRNewswire/ — Between its second IPO in 1988 and its delisting in October 2019, the prestigious American auction house often reoriented its global strategy and made numerous operational adjustments involving cost management, offering more guarantees, structural reorganizations, new managerial team, etc. But Sotheby’s has arguably made the biggest change in its history this year, by completely dematerializing its catalogs and asserting itself as the leading platform for online Fine Art auctions.

"The history of Sotheby’s over the past thirty years is a marvelous illustration of the recent history of the Art Market," says thierry Ehrmann, President and Founder of Artmarket.com and of its Artprice department. Artprice traces this history through the three main periods preceding Sotheby’s acquisition by Patrick Drahi and its digital transformation in 2020.

At the end of the 1980s globalization took Art prices to new heights. The $78 million hammered in 1990 for Pierre-Auguste Renoir’s Au Moulin de la Galette (1876) set a historic record at Sotheby’s which lasted 14 years. But the financial disequilibrium resulting from the arrival of Japanese collectors supported by their fast growing economy led to a price crisis often referred to as the "Impressionist bubble".

After a couple of difficult years in 1991-1992 (that dealers and galleries still remember), the Art Market rapidly stabilized. Sotheby’s intensified its operations taking advantage of technological innovations linked to the development of Internet. In 1999, Sotheby’s recorded 27,550 Fine Art transactions, the highest annual number in its history. But the "Internet bubble" ended with a stock market meltdown.

For three years, from 2001 to 2003, Sotheby’s gradually reduced the intensity of its operations. This allowed the firm to return to a more solid base which underpinned the following four years (2004-2007) and a quadrupling of its Fine Art auction turnover (3.8x). The Art Market was entering a new era and Sotheby’s wanted to be at the helm. On 5 May 2004, an artwork crossed the symbolic $100 million threshold for the first time when Sotheby’s sold Picasso’s Le Garçon à la Pipe Pablo (1905) for $104.6 million in New York.

In 2007 Sotheby’s posted a 50% increase in its turnover and its growth was steaming ahead as 2008 unfolded. However, the collapse of Lehmann Brothers on 15 September heralded the start of a major financial crisis. Ironically, on the same day, Sotheby’s went ahead with its famous Damien Hirst sale Beautiful Inside My Head Forever in London generating $73 million.

Although the 2009 art market was impacted by the financial crisis (-60%), Sotheby’s Fine Art turnover remained higher than its pre-2004 figures. However, it clearly decided to reduce its volume to a relatively stable 11,000 to 15,000 lots sold per year. This strategy quickly paid off and Sotheby’s recorded the best two years in its history in 2013 and 2014, with each year boasting a result above the $100 million threshold.

Between 2016 and 2019, Sotheby’s started to seek a new equilibrium, notably via the development of online sales. In 2017, the company attempted to boost its online sales channel by waiving buyer fees… only to reintroduce them the following year. Works by Basquiat, Modigliani and Monet – which marked these four years – were all sold in traditional auction rooms.

This is no longer the case in 2020: on 29 June Sotheby’s managed to sell its star lot, Francis Bacon’s triptych Inspired by the Oresteia of Aeschylus (1981), for $88.55 million (incl. fees) during a online sale broadcast on Internet. Sotheby’s clearly sees the future of Fine Art auctions in this new format…

*Don’t hesitate to contact our Econometrics Department for your requirements regarding statistics and personalized studies: [email protected]

Artmarket is a global player in the Art Market with, among other structures, its Artprice department, world leader in the accumulation, management and exploitation of historical and current art market information in databanks containing over 30 million indices and auction results, covering more than 744,000 artists. 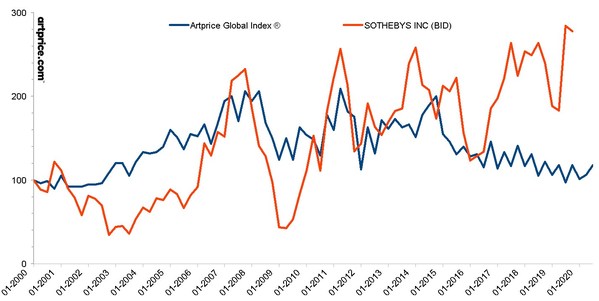