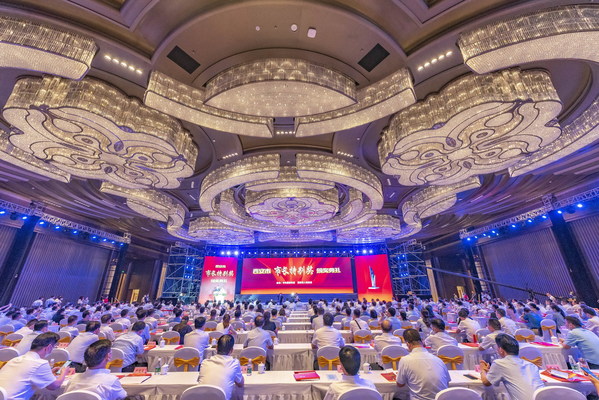 On August 5, the award ceremony of the "Mayor’s Special Award" that is designed to recognize outstanding contributions to the development of Xi’an was held in the city.

Among the 50 entrepreneurs and teams named as winners are either advanced manufacturing companies such as BYD Company Ltd., Samsung (China) Semiconductor Co., Ltd., Shaanxi Fast Auto Drive Co., Ltd, or cultural and tourism enterprises like Datang Everbright City Management and Operation Team, Shaanxi Changhenge Performing Arts and Culture Co., Ltd. and others. It is worth noting that, as the president of Xi’an Janssen, a multinational pharmaceutical company that has rooted in Xi’an for 35 years, Asgar Rangoonwala, received this honor. He said in a later interview: "The development of Xi’an Janssen benefits from Xi’an’s continuous optimization of investment services and business environment, which further strengthens Xi’an Janssen’s confidence in taking root in Xi’an and serving China."

In the first half of this year, by advancing the economic and social development while conducting pandemic prevention and control, Xi’an ranks No. 1 among China’s sub-provincial cities in three major economic indicators including the GDP growth rate, the growth rate of industrial added value of large-scale enterprises, and the growth rate of fixed asset investment. This achievement owes to tens of thousands of companies and entrepreneurs in this city as well as its open and inclusive development philosophy.

Wang Hao, a member of the Standing Committee of CPC Shaanxi Provincial Committee and the Secretary of CPC Xi’an Municipal Committee, said that Xi’an will strive to create a first-class business environment, provide the most considerate, heartwarming, and sincere services, and establish a clear guiding principle of respecting, caring for and supporting entrepreneurs to allow them to have a sense of honor, be in a high social position, and get material benefits.

For a very long period in the history, Xi’an, an ancient city in western China, had always been China’s commercial and trade center. It was also the center of the world economy before the Industrial Revolution. Time has changed over the past thousands of years, but this ancient city has always been full of vitality and maintained a strong momentum of development.

The "Mayor’s Special Award" is a special award that was set up in this April by Xi’an in order to further encourage entrepreneurs, teams and individuals to focus on the advanced manufacturing industry and cultural tourism to build up a economically powerful city. The award can be applied for by a variety of enterprises such as industrial system constructors, innovation-driven companies, and those who attract large investment and run strong projects. It aims to serve the construction of Xi’an’s modern industrial system and the national central city in China. Individuals and teams who won the "Mayor’s Special Award" will receive a cash prize of CNY 500,000.

Image Attachments Links:
Link: http://asianetnews.net/view-attachment?attach-id=368927
Caption: On August 5, the award ceremony of the "Mayor’s Special Award" that is designed
to recognize outstanding contributions to the development of Xi’an was held in
the city.