Users now can hail a robotaxi from train stations, hotels, and other public spaces in one easy click

CANGZHOU, China, August 21, 2020 /PRNewswire/ — Baidu (NASDAQ:BIDU) today opened the Apollo Go Robotaxi service in Cangzhou, Hebei province, extending robotaxi coverage to the downtown area of a city for the first time in China. The launch marks a significant milestone in Baidu’s development of autonomous driving technology and its aim to bring about the era of intelligent transportation. 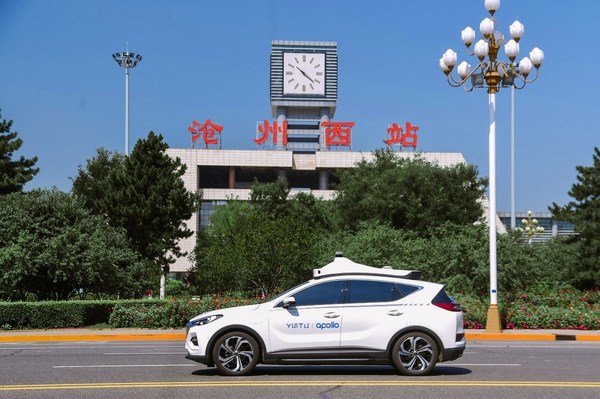 With Apollo Go, people in Cangzhou can hail a robotaxi ride from train stations and other public spaces.

At first, the Apollo Go Robotaxi service in Cangzhou covers 55 pick-up and drop-off stations across the city, including train stations, schools, hotels, museums, business and industrial areas, and other public spaces. The launch in Cangzhou comes after Baidu opened robotaxi services in a 130 square kilometer region of Changsha, Hunan province, in April this year. By servicing busy areas of Cangzhou, Apollo Go is making autonomous driving technology more accessible—and helpful—to users as they go about their daily lives.

People in Cangzhou can easily hail a free robotaxi ride through one click on Baidu Maps. For example, visitors to Cangzhou could hail a robotaxi after getting off the train to take them to their hotels. With safety a top priority, a human operator is assigned to each vehicle to take control of the autonomous system as a backup.

The launch of Apollo Go in Cangzhou follows years of extensive testing and trial operations across several cities. Technological progress now enables robotaxis to safely operate in busier areas that have more variables for the autonomous driving system to process. In addition to the operations in Changsha and Cangzhou, Apollo continues to conduct manned autonomous driving tests in Beijing, Chongqing, and other cities.

The ability of autonomous vehicles to operate in busier areas of a city is a result of Baidu’s continuous innovation. In 2019, Baidu Apollo and FAW Group jointly developed Hongqi EV, the first pre-installed and mass-produced L4 autonomous driving vehicle in China, and launched trial operations in Changsha in September.

Baidu, Inc. is a leading search engine, knowledge and information centered Internet platform and AI company. The Company’s mission is to make the complicated world simpler through technology. Baidu’s ADSs trade on the NASDAQ Global Select Market under the symbol "BIDU". Currently, ten ADSs represent one Class A ordinary share.